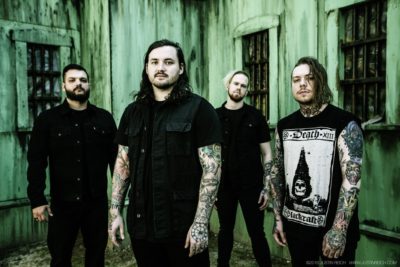 The Browning could very well be heavy music’s answer to the Terminator. Whereas everybody’s favorite Arnold Schwarzenegger cyborg hid an exoskeleton under a sheath of skin, the Kansas City quartet—Jonny [vocals, electronics], Cody [drums], Brian [guitar], and Rick [bass]—thinly veil a hard rock edge beneath a casing of skittering electronic dance music, hip-hop grime, metallic brutality, and industrial expanse. That signature style is “back” in a big way on their third full-length album and first for Spinefarm Records, Isolation.

Since emerging with a bang on 2011’s Burn This World and refining their attack on Hypernova in 2013, the group has destroyed stages alongside everybody from Fear Factory to Static-X to We Came As Romans to Alesana to Chelsea Grin to Shadows Fall on national tours. Hypernova would clinch “Album of the Week” honors from Revolver, while their fan favorite video for “Bloodlust” would rack up over 1.8 million views by 2016 as they built an impressive social media audience exceeding 212K Facebook fans.