PARKER is the new sound of Chicago. They are a band rooted in the energy and spirit of punk and rock and roll, while embracing the melodic side of modern music. The songs they have crafted take listeners on a journey through soft, soulful verses that explode into energetic choruses. PARKER has made a huge impact on the Chicago music scene in 2018 alone and is making their way through the Midwest. 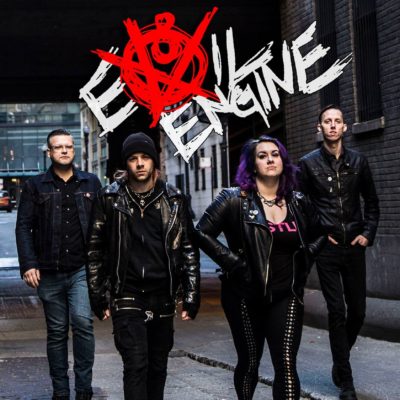 “Don’t be a part of it; stand up and always question. And if you don’t, then you’re becoming the fuel for the evil engine…”

Used as a metaphor for pop culture’s vapid stranglehold on society, it is the evil engine that powers modern ideals and standards; Evil Engine is the resistance against such complacency with punk rock energy, heavy metal groove and aggressive female vocals, with unapologetically honest lyrics zeroing in on issues such as social responsibility, societal blight and the validity of theism, among other concerns of the human condition.

Evil Engine is an amalgam of punk rock and heavy metal artists with over 50 combined years of musicianship.
Kryssie Crisis (aka Kryssie Ridolfi) of DEADMANSWAKE have teamed up with Mike Skull (of live performances with 45 Grave) Jamie Booth (formerly of Indolent) and Colin Holmes (The Massacres, Crusader) to bring you a myriad of punk, reminiscent of the early California “skate punk” sound; from the “Suffer” era of Bad Religion to more contemporary first wave and Oi! bands in the likes of Cocksparrer, Slaughter and the Dogs and Stiff Little Fingers, with aggressive nods to the metal edge of Motörhead and Anthrax.